Illegal Sand mining runs rampant in the Indi taluk of Karnataka’s Bijapur District. Apart from causing environmental degradation, the extraction of sand from the river bed has contributed to the taluk’s water problem.

Bijapur’s Indi is a peculiar taluk.  Covering 133 villages, the taluk is 2,215 sq km in area. With a population of 421,169, the taluk is known for its wrestlers and rotis made of jowar. However, Indi has a dark underbelly. The mafia and rowdy sheeters have run rampant in the taluk . The taluk sprung into the public eye in the wake of a murder that was allegedly organized by the police. The level of crime in the taluk affects its people the most. “The people of Indi are as good as they are bad,” Rajesh Pawar, a local athlete remarked.

Apart from crime, there is another issue that has plagued the taluk. That is the scarcity of water. “There is not even 10 per cent of water in the Almatti dam,”said Abdul Gani- a farmer at the Hirebevannur village. Standing next to Gani, was a middle aged man. Introducing himself as Kuru, he detailed the ordeal that farmers go through. “Due to the lack of rainfall, we do not receive sufficient profit despite there being APMC yards. The loss we’ve endured is worth Rs. one Lakh. Would profits of Rs 5000- Rs 6000 be enough?” The Bhima River, which covers a distance of 110 km acts as the main source of water to the taluk. . However, the water scarcity is not incidental. The extraction of sand from the river bed has contributed to this problem to a large extent.

Environmentalist Yellappa Reddy agreed. Explaining how sand mining affects the river bed, Reddy said, “The sand in the river is highly porous.  The porous medium will facilitate the flow of water. The sand will allow the water to gently pass through as it recharges underground aquifers. This will cause the nearby wells and borewells to be recharged as well.” Contending that the lack of sand in the river would cause these water bodies to dry up, Reddy said- “if there is no sand, the water will flow at a rate of 100 km/hour. If there is sand, the water would flow at a speed of 1 to 2 km/hour.”

However, the mafia has sunk its teeth into the river beds as well with sand mining turning into a lucrative business for many. “They do it secretly,” an aspiring journalist Sandip Shinde (name changed) said. “They give Rs 1000 to Rs 2000 to the Police- Sub Inspector (PSI)  as a bribe in order to conduct operations.” “The miners are then allowed to work during the day, from 6 am to 12 pm..” Pawar agreed, “The MLAs are complicit. It happens in the open.”

In November 2018, Mohan Kumar- Assistant Director of the Department of Mines and Geology noted that all forms of sand mining in the region had come to a standstill three years ago.  “An Ex MLA Sarva Bhoum Bagali had filed a petition in the National Greet Tribunal after which there was a stay order on sand mining.” Kumar noted that mining in the region occurs on the Bhima river bed. The sand is extracted from a quarry in the river bed which is subsequently used for construction. Explaining the reasons as to why the mining is conducted on the river-bed, Kumar noted, ” The level of sand that is needed to meet our requirements exists on a river bed.”

If there is one community affected the most by mining, it is the farmers. Meet Kuli Kowligi of the Agarkhed village. He says he his 46 but looks much older. His work involves watering the field, sowing seeds etc. His day starts at 6 am and is cut short at two in the afternoon. “They cut off the supply of water to the fields during the night,” he noted. A father of two sons, Kowligi is joined by his wife on the farm. At a time when rainfall is scarce, farmers like Kowligi contend that the harvest is negligible. Kowligi believes that sand mining in the region has reduced the level of water in the river, which has added to the problem. He is not an exception.

Somewhere along the road to the Bhima River, a lady crouched. She wiped the beads of sweat from her forehead with her sari while simultaneously watching over a basket. “This is all the harvest I have after a year,” she remarked. 35-year old Irama Chatri has been married since she was 12 years old although her husband passed away on account of an illness six years prior. Her day begins at six in the morning. “I wake up early to prepare meals,” she says. Chatri is on the farm at 9 am. Then, she breaks for lunch at one in the afternoon. However, farming alone doesn’t do the job. With income being unsteady from her children, Chatri has turned to the needle. “I get Rs 50 for stitching a cloth and Rs 5 per button,” she noted. On a good day, the tailoring business brings Rs 500 a day. Indi’s water problem has made farming an unprofitable business for Chatri. “Earlier, I used to earn Rs. three lakh in a year. Now I get around 5000 a year.” Like Kowligi, Chatri believes that sand mining in the village has added to the water problem.

Life for Dhyanappa is no different. His work begins at 6 am and in his own words, ‘goes on throughout the day’. The water problem was not indifferent to the 38 year old. “The level of water is less,” he said. Dhyanappa also believes that sand mining in the region has added to the water problem. However, not everyone in the farming community held this view. “There is no sand mining here,” said 20 year old famer cum B.com student Panchu Chatri. A victim of the water problem himself, Panchu noted, “The water problem has no relation to sand mining,”- he added. Shivanand Gowda Biradar, also a farmer maintained that there was no sand mining in the region. “Mining has stopped here.” he said. “Sand is only extracted if there if there is a government order. Otherwise, there is no mining.” Apart from adding to the water problem, Sand mining also has other affects. A study by the Department of Geology at Nagarjuna University in Guntur Andhra Pradesh said, “The sand mining has several impacts on the river environment. Sand mining disturbs and completely removes  habitat from the mined zones.” The author  Podila Sankara Pitchaiah illustrates that sand mining changes the flow of the river and disrupts the food chain by removing habitat in the regions being mined.

However, there is a flipside to this. A paper titled ‘ The effects of Sand Mining in Rural Areas’ discusses the effect of sand mining in Rural Communities. Examining sand mining along the coast of South Africa, the paper notes that  sand mining creates economic opportunities. However, it also has various social, cultural and environmental impacts. “Due to scarcity of water, people do not find farming economical.  Hence, they move to sand mining because it provides a more stable income,” Shinde noted.

With regard to economic viability of sand mining, the National Green Tribunal in 2017 held that mining in the Bhima river was impermissible unless it was in consonance with the Sustainable Sand Mining Management Guidelines of 2016. In this judgment, the court was referring to in-stream mining and mechanical- riverbed mining. An application was filed by the miners in response to an earlier order that prohibited the State of Maharashtra from granting any permission for instream suction mining of sand. The applicants contended that they had deposited auction amounts ranging from Rs 60 Lakh to Rs 5 Crore to purchase a land site and blocks in the area. Hence, that they have a right to excavate sand from these blocks through in-stream mining. Instream- mining refers to the direct removal of sand and gravel from the natural flow of rivers and streams. Instream- mining causes an incision on the river bed.

There are voices within Indi that believe that this ban on sand mining has in fact led to the rise in prices of sand, thereby making it difficult for the poor to have houses constructed. “The rate of procuring sand is high,” Siddhu Karike, a mobile shop owner remarked. Sand is used for the construction of houses. Karike believed that this issue of demand- supply affected the lives of farmers as well. Sanju Patil, a 45 year old farmer did not mince any words while discussing the ordeal that common folk undergo to get sand in Agarkhed. “The police charge a bribe of anywhere between Rs 10,000 to a lakh for a truckload of sand. Currently, there is no facility for us to get sand.”

“Sand mining in any river will be detrimental to an entire area,” notes Reddy.  Reddy believes that sand mining on the river bed could potentially deprive the community of quality water. He added, ” The River is like a human body and sand is like the flesh. If you remove the flesh, only the skeleton would remain. This would cause the river to die and cause the entire ecosystem to collapse.”

Mohan notes, “Various water sources like say borewells are dependent on the river. When we extract sand from the river, these borewells could be affected. ” Mohan also mentioned that the ecosystem of these rivers would be disturbed due to mining. ““The Water and river bed is sensitive ecosystem, where small living organisms reside. The excavation of sand makes it difficult for these organisms to breathe and move. The plants gain nutrients from the soil, which the enables the organisms to gain oxygen through photosynthesis.”

He added, “When vehicles move there, the tar and oil in these vehicles lead to oil slicks which makes it difficult for oxygen to pass through water.”

Despite claims by locals, officials maintained that there was no sand mining in the region. The Superintendent of Police for Bijapur, Prakash Nikam believed that the role of the police was limited in cases relating to mines and minerals as they are to be registered by the Geology Department. The number of registered sand mining cases in Bijapur District for years 2017 and 2018 were 293 and 248 respectively. As of January 2019, the number stands at 10. The number of sand mining cases registered at the Indi (Rural) police station for the same is 107, 81 and 5 respectively. The Indi (Rural) police station covers 49 villages. Hence, it is clear that for the year 2019, Indi(rural) police station alone has registered half the number of cases for the entire taluk. The Department of Mines and Geology has registered 300 cases in 2017-18. That number stands at 250 as of April 2019.

Reddy presents a bleak picture where rampant mining has destroyed the environment,“ If this practice continues, there will only be buildings as sand would be used to construct houses. The river has become a means to make money. There would eventually be no quality water, no plants and no water to purify.”

Furthermore, the effects of sand mining can be reversed. Mohan Kumar, who now holds the designation of a Senior Geologist, believed that sand in the riverbeds could be restored naturally with time. “If we leave nature to its own devices for a period of six to seven years, the sand would be restored.”

When hope becomes the biggest threat 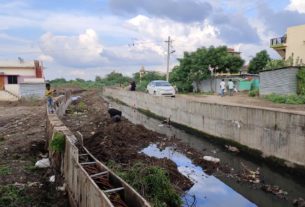