Skip to content
Home > Agriculture > Sugar Factories: Not So Sweet

Shree Renuka sugar factory releases untreated wastewater directly into the fields of the  Burlatti village. The chemically contaminated water is destroying the crops of the villagers. The groundwater of the village has become unsafe for drinking.

Sandeep Razak is a farmer who owns five acres of land. He cultivates sugarcane, maize, and banana. He said, “All of my crops have been destroyed by polluted water. I invested Rs 25,000 on my fields but I’m not getting any return out of it.”

Dileep Solanki is Sandeep’s neighbor. He owns six acres of land. The chemical waste released by the sugar factory passes directly through his land. His crops are badly impacted and the growth of crops has decreased by more than 50 percent.

He said, “Earlier we earned 1 lakh rupees per three acres which are now reduced to Rs 50,000. We hardly make any profit from agriculture anymore. Most of our crops are destroyed by the sugar factory’s polluted water.

He said that villagers get the groundwater tested from Krishi Kendra. Reports showed that water is unsuitable for drinking. He travels many kilometers to get drinking water, he added.

As per the Krishi Kendra report, the water released by the sugar factory contains heavy metal, baggage, chlorides, sulfates, solid sugar particles. When these particles are mixed with soil, it changes the nutrition composition of the field. The regular exposure of these chemicals into the field makes it infertile and highly toxic.

The groundwater in Burlatti village has become unsuitable for drinking for cattle and other domestic animals. Many cattle died drinking contaminated water. In 2018, villagers staged a strike against the factory and hung the dead cattle in the front gate of the factory.

In the wake of the villagers’ protest, the factory started supplying drinking water to some people. They urged people not to complain against them.

Arun Kumar, an environmentalist, said, “Sugar factories release polluted water without treating them. The untreated water not only pollutes water bodies but underground water as well. When chemically contaminated water is used for irrigation through the process of bio-magnification, chemicals enter plants and we consume them as our food.”

In the last few years, the number of patients due to polluted groundwater has significantly increased. Ravi Pangi, Urologist said the people’s health gets affected when they consume polluted water.

He said, “Sugar factories produce molasses and spent wash. Many sugar factories run manure plants as well. Spent wash is converted into manure and urea is produced as a byproduct.”

He said that in the last few years a lot of young people have consulted him for non-communicable diseases, like hypertension, diabetes, cancer, etc., caused by drinking contaminated water.

Athani taluk is one of the biggest producers of sugar in the country. There are 24 sugar factories in Belagavi district and six of them are in Athani Taluk. Shree Renuka Sugar factory was set up in 2007 in Burlatti village of Athani Taluk.

The people of Burllatti village demand compensation for their destroyed crops.

Too young for Marriage 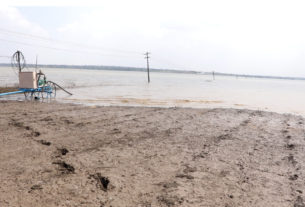 Nothing Remained When it Rained