Amjad Nazir of Jayanna Bags says, “I am getting good response and I also get
good profit. It’s nice to see people coming here.” It’s not just about bags. Jackets, watch belts, Phone cases etc could be easily seen in these shops.

Shrey Kumar and Khyati Nayak, animal compassionate, say that they absolutely believe in veganism and its products. They get the same fashion what they get in swat leather.

Apart from selling animal leather products, the establishments of these shops selling vegan leather have increased in the city. Luxury brands and designers like Stella McCartney, Melie Bianco, Cult of Coquette, Denise Roobol had been producing non animal leather products since years and have earned people’s
as well as PETA’s recognition.

Bangalore based brand, Hydes’ designer duo Hari Madhvan and Ramya Hari Madhvan say, “Already there’s a lot of animal cruelty that goes on in fashion industry so it is important to at least take an initiative to bring the best fashion without bloodshed.”

More and more such merchants now sell non animal leather products which are made of microfiber materials like vegetan, lorica and PVC. 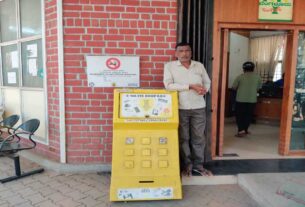