Victims of acid attacks are finding their voices though collective action but the law invariably fails them, says Ankita Mukherjee

Rajnita, 23, was in her teens when a boy from her village in Meerut attacked her with the corrosive substance disfiguring her face. For rejecting his proposal of marriage, she paid with an eye, her nose, and her ears and has undergone 23 surgeries. She refuses to cover her scarred face with a dupatta because she knows she did nothing wrong but nonetheless hesitates to meet people. She met a friend who used to work at the Sheroes café, set up by acid-attack victims like her, and joined them.

“Did you watch Chhapaak?” she giggles. “My friend acted there, the movie gave us validation and talked about our stories to the world. I want to graduate and study further. I have to put a full stop to all the question marks I have been facing since my attack.” In Deepika Padukone’s recent movie Chhapaak, the protagonist says, “Kitna accha hota agar acid bikta hi nahi, milta hi nahi toh fekta bhi nahi” (If only acid wasn’t sold, wasn’t available, it couldn’t be thrown). A bottle of acid, which costs just Rs. 20, can ruin one’s entire life.

According to research by the non-governmental organization Make Love Not Scars, 20% of acid attacks are the result of land, business and property disputes. But the vast majority are fuelled by unrequited love, rejection of sexual advances and dowry disputes. In 95% of cases, the attacker is very well known to the victim. He is either her friend, uncle, neighbor or husband, and can even be her father.

Says Reshma from Kanpur, “I am a mother of five girl children and when I got pregnant for the sixth time, my husband beat me thinking I’d have another girl child. He didn’t stop there, he splashed acid on my face and left me there. My elder daughter called my parents and my father gave me his all his support. I filed a case against my husband, he got 11 years of imprisonment but after 6 years he got bail. I don’t think this is a way to punish them. I wish the same situation happens as a punishment for them, splashing corrosive substance on them.”

“I am happy with my six children now. I joined Sheroes café in the year 2016 but I was connected with them since 2014, when Alok sir and Laxmi didi helped me to fight back my darkness. Now I do not cover my face and I want to join a tailoring class so that I can open my own boutique shop,” she adds.”

Laxmi Agarwal was also attacked with acid when she rejected a marriage proposal at the age of fifteen. “It takes up a lot of courage just to come out of the trauma or darkness,” she says. “Even if you want to recover, society never lets you forget. I have been called a witch. Society is cruel and taunts even a normal person. I was the victim and I had nothing to be ashamed of.” Laxmi was one of the founders of the Chhanv Foundation, set up to rehabilitate victims and help them to come out of their trauma, which includes medical aid, legal advice, counselling services and vocational training.

Sheroes Hangout is a café and run and managed by acid attack survivors and operates from two locations, Lucknow and Agra. In 2014, Alok Dixit, a journalist turned activist, set up the Sheroes Hangout in Agra, with the idea of rehabilitating survivors of acid attacks. They are a part of Dixit’s Stop Acid Attacks campaign, which he launched with his then partner, Laxmi.

Preeti from Satyapur, a small village near Kanpur, was attacked when she was just 18. “I was being followed by an uncle from our mohallah for quite a long time, he proposed marriage but I rejected him. The next day he came while I was filling water and poured acid on my face,” she says. “I joined Sheroes in 2014, and after coming here I have seen this has happened to women who are mostly from lower or lower-middle-class families. Now, I’m pursuing my master’s degree. Acid cannot put a full stop to my life.”

Jaf Shah, executive director of the London-based non-profit Acid Survivors Trust International, estimates there are around 10,000 attacks annually worldwide. The numbers have dramatically increased in the UK in recent years where acid is used as a weapon in gang violence. He says there are acid attacks in the United States as well, but the rates remain lower, perhaps because of the easy availability of other weapons, including guns.

The most recent statistics from India’s National Crimes Record Bureau record 283 reported acid attacks, with 307 casualties, in 2015. Official figures show only a fraction of the actual number of such attacks, activists say, with “thousands of the cases” going unreported.

The Orange café and restaurant is another café owned and managed by acid attack survivors in Varanasi’s Durga Kund area. Aided by the Care Today Fund, an India Today Group initiative, in partnership with the Action Aid Association (AAA), it has a library, a community radio hub and a boutique that showcases the artwork of the survivors.

Tania Singh, founder of Make Love Not Scars explains their work saying, “Hotline centres should be set up and there should be shelters for women who fear to stay alone. They need to understand that the acid attack is the last step taken by the attacker among the brutal series of violence. So after the acid attack has taken place, the first thing to look for is medical aid to save their life. Our organisation run a rehabilitation centre for the survivors and we pay for their medical treatment and we run a regular routine check up on them.”

“The second thing what we provide is psychological rehabilitation or counselling. They go through trauma and society or their own family members often taunt them, which makes them sometime try to take their lives. So that’s needed to be prevented,” she says.

“The third is to give them skill training or education so that they can live independently without thinking twice that what my man or my father will say,” she adds. Tania says the fourth is the legal advice given to the victims and this what takes more time and energy because one needs to make sure that the attacker gets proper punishment and he doesn’t get bail soon.

“India has one of the highest rates of acid attacks, along with neighbouring Bangladesh and Pakistan. Though some victims are men, the vast majority of those attacked are women. That makes the pride on display at Sheroes particularly powerful,” says Jaf Shah.

“If women that have been attacked by acid are banished behind a curtain and don’t come forward, then I think that’s part of what the perpetrator wants to achieve. To come forward and say, ‘Actually I’m going to carry on living my life’ … that’s pretty inspiring. Passing law becomes almost ineffective, meaningless if there isn’t sufficient enforcement. You have to invest money, resources, training, equipment … to minimize acid attacks occurring, and that’s not occurring,” Shah added.

Singh believes violence against women can only be curbed by implementing strict laws. Justice, she says, should be delivered fast and in public, not just to deter would-be assailants but to demonstrate zero tolerance such barbaric behavior in our society.

Business outside the house of faith, in ruins 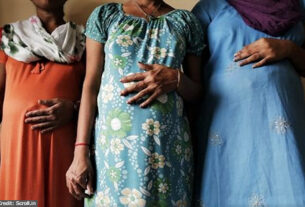 She bleeds to death: Pregnant struggles on the way to nearest PHC