A hike in the tax rate has affected the sales of timber markets in the city.

Bangalore, January 18, 2017: The timber industry and saw mills across the city have seen a decrease of 40-50 per cent in their sales. The owners have blamed the introduction of GST as the major reason for this nosedive.

Before GST was imposed, the tax rate of timber took a leap from 14.5 per cent to 18 per cent almost a 4 per cent hike in the tax amount.

Teak, the most preferred wood by new house buyers is the worst hit, said owners of saw mills.

Timber traders from Mysore said that Burma Teak, Malesiyen Sall, Australia Honne and Ghana Teak are the imported from Indonesia, Malaysia and Africa. While Neem and teak wood of Indian origin are auctioned by the Forest Departments state wise at regular intervals.

According to the Indian Forest Act, 1927, the felling of timber trees has been made illegal, Forest departments auction is the only way Industry players can purchase wood.

“We sell teak in large quantities but the customer asks for a reduction in the tax amount, which is a big problem. For example, a customer buys wood for Rs 7 Lakhs, then according to GST an amount of Rs 1,26,000 is payable as tax which becomes an overhead cost for the customer and he asks for a reduction. This is where we suffer more losses as owners of shops,” explained Jagadish H Patel, owner of Mahesh Timber Mart.

Saw mill owners are looking at cost reduction tools. They are laying off a few of their employees because all other costs are on the rise, with taxes increasing and sales reducing.

“The business has been hampered after the hike in tax rate. The sales have decreased by over 45 per cent as compared to last year. The other costs such as petrol and diesel have not reduced so I had to downsize my workforce, earlier there were 15 now only four.” said Mani Lal, Sri Bhagawan Saw Mill.

Demonetisation also has a role to play in this. The real estate market is stagnant and houses ready to be sold  are not being bought because of restrictions the Govt has set on cash transactions. There is a fall in demands for wood work (doors, windows, even in some cases, pillars and supporting beams) as fewer houses are being bought.

“Now that all the money spent on buying a house has to be accounted for, people are more careful. Since lesser houses are being bought, fewer home owners are buying wood in retail shops to make the own furniture” clarified Sameer Doshi, a retail plywood dealer.

Architects in the city have said new home owners (small and medium budget buyers) have collectively impacted plywood sales. The high budget buyers are still buying wood. But the plywood sales are going down as  more budget home buyers than high net worth individuals.

Kanika Nayyar, an architect said, “Our customers have not been affected, because they buy in bulk and they do get some rebate in their total purchases. We only deal with high net worth customers, one of our customers just bought timber for 2 crore. However, people with budgets not that high have reduced wood work to an extent. Smaller groups of budget buyers have surely impacted the sales of the timber industry.”

Elixir Buildcon Pvt. Ltd’s Managing Director, said, “We had avoided wood use wherever possible last year. Instead of shuttering ply we use aluminium sheets and uPVC as they are re-usable, so, now that the tax has gone up our cost will also increase and will reflect in our final product.  Not only wood, raw materials cost on most building materials has gone up thereby collectively increasing the cost of the houses we build for further resale.”

According to experts like Chartered accountants indirect tax is a major income source for the Government and they analyse the habits of consumers and tweak the tax rates of items accordingly. Vaibhav Ahluwalia, a chartered accountant, BSR & Co. LLP said, “Basic purpose of the taxes is to generate revenue to the Government. In addition, if they see the demand of a particular product going up rapidly and that product is not a necessity for the people it might charge higher rate of tax. They also take into consideration the demand of the product in global market. If it wants that particular product to be exported along with benefits under FTP it regulates its internal tax structure. On demand of the industry the govt might reduce the tax amount but only when they consider it being unfair or not being in public interest.”

Were trees sacrificed for Indira Canteen? 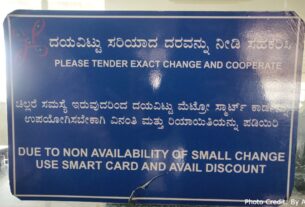 No smartphone or card? You can’t board Metro