Benguluru has a vast textile industry that has been affected adversely due to the Covid-19 pandemic. Textile & garments industry in India is expected to reach $223 billion by 2021 from $140.4 billion in 2018, according to Invest India statistics.

Manufacturers in the Textile Industry-

Motherland Garments Private Ltd’s Managing Director A.J. Pandiam said that the first wave did not affect them much as they got opportunities to expand their business at that point. He said that people were not able to carry out the production properly as they had lesser funds and workers. Therefore, they acquired production units at lesser rates. “The situation was getting better after three to four months after the nationwide lockdown. However, the second wave destroyed our hopes,” he added. He also revealed the fact that about 25 percent of migrant workers have not returned to work. However, none of the salary paid employees were fired during the year.

Pandiam further explained that their sales always increased in festive and marriage seasons when people prefer buying new clothes. However, in the past year festivals weren’t celebrated the way they were before the pandemic. Therefore, they didn’t experience the boom period in their business, he added. Also, the marriages were restricted to a limited number of people attending it. Therefore, they didn’t receive many orders for garments for marriages. The current scenario is that due to the lockdown in Karnataka the operations have been halted since a month now.

Jadavi Textile Mills’ Managing Director Ankit Jain also elaborates on the sale going down due to lack of festivities and marriages. He further explains that some companies manufacture night dresses or synthetic garments wherein they don’t face many losses and get sufficient orders. However, the ones engaged in manufacturing ethnic and marriage wear might suffer a loss and might not experience the boom period when it usually used to. Their sales went down by almost 40 percent as their sales went down from 24 million meters cloth to approximately 16 million meters cloth a year.

He also explains further on the availability of migrant workers. He said that almost all the migrant workers went back during the first wave of the pandemic. When the nationwide lockdown was eased last year, they returned. However, when things were getting better again, the second wave of the pandemic kicked in. This time too workers went back due to the lockdown in Karnataka. However, they were able to withhold a lot of them back by providing them their essential needs, he added. This time he hopes that when the production will start on a better scale, things will be in control.

They have employed 19 salary paid employees and none of them were fired and they were following the same salary structure as before the pandemic. Pandiam also commented on this saying that the bigger manufacturing companies find it difficult to deal with these losses and lack of sales as they have larger number of neither workers nor salary paid employees. Larger companies follow a hierarchy of managing director, general manager etc. and have to pay a lot more people.

Textile Engineering Industries that manufactures textile printing machinery has shut down its operations due to the lockdown. They had 12 workers before and now they just have four as they are not producing at a large scale. Their income was around Rs. 60 lakh to Rs. 80 lakh before the pandemic. However, the just earn around Rs. 3 lakh to Rs. 4 lakh, which is a huge downfall. They spend around Rs. 2 to 3 lakh now, in contrary to more than Rs. 50 lakhs before the pandemic.

Wholesalers in the Textile Industry-

Ramesh, the wholesale dealer of Nandi fabs, said that due to lockdown, retail shops are shut and therefore, they are not receiving orders. Their sales have gone down by almost 50 percent in the last year due to multiple lockdowns, restrictions etc. The manufacturers are also manufacturing limited fabric. Therefore the wholesalers, who are a link between these manufacturers and retailers, suffer. “We are not getting enough stock to supply to different retailers due to low scale production. Also, there are times when retailers do not place orders. In both the situations we are the worst affected,” he added.

Lavanya Silk Fabrics’ dealer K.R. Gajendra said that they deal in supplying ethnic and marriage wear and due to lesser festivities and marriages; their sale has gone down than it was before the pandemic. They had stocked a large amount of produce and now have to incur warehouse expenses which add on to their losses and expenses, which has been detrimental for them. In addition, they had taken loans in the past and had purchased produce on credit. However, they are not able to repay them back due to insufficient sales.

B.M. Kumaraswamy, a Bengaluru-based economist, said that wholesalers in any industry are the worst affected as they need to bear the shortcomings of the manufacturers and retailers. They need to bear warehousing expenses and they sometimes buy produce in bulk and failing to repay them is an added on pressure. Everyone wants their money back, therefore these wholesalers are often pressurized to repay the amount. In this situation, they prefer taking another loan and in this pandemic repaying such loans is very difficult as markets are not working due to lockdowns. The global market is also not functioning properly, he added.

Retailers in the Textile Industry-

The textile industry can’t run without the companies who manufacture textile garments. But if the retailers are not there then their hardwork is all in vain. This pandemic has increased the plight of these retailers. This in turn is affecting the whole chain of people involved in the textile market. Be it the wholesalers, manufacturers or the customers, everyone has been adversely affected. The worst affected among these are the people who lost their jobs due to the pandemic.

The textile garments retailers say they have been facing problems due to the Covid-19 pandemic ever since it entered India. Shops and stalls in local markets of Bangalore and other areas have seen a dip in sales and have reduced their profit margin drastically. Sellers say that they lost almost 80 per cent of the market compared to the situation before the Covid-19 pandemic entered India. Also, they faced problems due to the tendency of bargaining among customers, this is an added on pressure on the dipping profits and lower sales. Shops and stalls with limited capital funding revealed that they lost market because they can’t put big banners of discounts to lure customers. Imran Basha, a clothes stall owner in Jayanagar, is now selling t-shirts that he sold for Rs. 180 earlier at Rs. 120 now. “We have owned this stall for years and had never seen such a downfall. Also, our stall is small and situated in a corner which has led to lesser sales as other big shops have banners of discount or sale and we can’t afford it,” he said. In order to survive in the market, Naveen Collections in Shivajinagar, has reduced the price of all garments. The skirts that were earlier sold for Rs 350 were now sold for Rs 250; pants were sold for Rs 200 to Rs 250 which was earlier sold for Rs 300. These cheaper prices may lure a bunch of customers but a whole lot of people don’t visit these markets which is leading the situation to get worse.

In addition to all the aforementioned problems, employees at these shops have been sacked as the owners were unable to pay them out of the little profits they made. Also, some of them were still running in losses so they are not able to employ people. The owners also said that since they had lesser customers and the rush wasn’t too much,so they don’t need more people to handle the shop. Arbaaz Khan, an employee of Naveen Collections, said, “We just manage to get 10 to 15 per cent of sales now compared to what we used to get earlier. Due to lesser sales and decreased profit margins it was difficult for our owner to pay the staff. So I am the only employee left here and others were fired.” Also, they said that it was difficult for just one or two employees to look after the shop, sales etc. So, the owners have also assisted them in the same, which they didn’t do in the past. Imran said “I didn’t visit this place often and my employees did all the work, but as they workforce is less now I look after the accounts as well and hgelp in selling our products.

Some people also shifted to other modes of income. Shops announced clearance sales as they had to shut down. Mahavir Collections, a designer garments store in Jayanagar, announced a 50 per cent discount on all garments as they had to shut down the shop. In contrary, amidst all the discount game in the market, there were sellers who did not provide any discount whatsoever. Abdul Qayum, a clothes stall owner in Jayanagar, said that he had been facing losses recently but he did not provide any discount on any garments he sold as the transporting expenses had increased due to rising fuel prices. Also, in recent times, the people who want to set up new stalls or shops are facing issues as the market is not doing well and for them entering this market is going to be a problem. 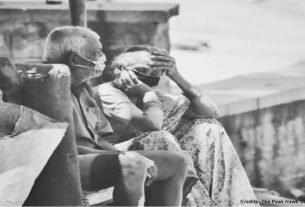 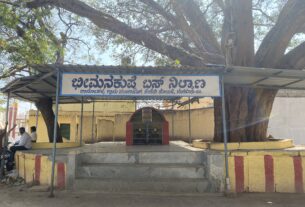 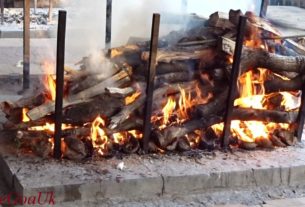 A lonely funeral amidst COVID-19 lockdown in Assam