Skip to content
Home > City > Stray leopards out in the open

The forest cover was home to three leopards, out of which one was caught yesterday and taken away.

Bangalore, March 1, 2018: A three year old leopard was caught yesterday by the Forest Officials as it jumped over a 100 ft wall into Wonder La Amusement Park in Kengeri.

The Eucalyptus forest behind the park where the leopard had strayed in earlier was burnt down by the villagers leaving the leopard scared and thus making it jump into the park.

Reshma, a condiment shop owner in the village, stated that the leopard was shot and was made unconscious after which it was taken by the officials in the truck.

The village Manchanayakahalli, is surrounded by dense forests around it which is a natural habitat to animals and sometimes wild animals end up entering the village.

In a similar incident narrated by Ravi Chandra, a local, a leopard had invaded the village  killing a dog, this was the second time a leopard was spotted in the village. However, the wild animals don’t do any harm to the residents of the village, he added. 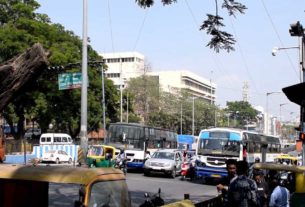