T.S Chandrashehkar Bhartiya Janata Party’s (BJP) spokesperson said, “In our BJP party, if any of our party members, activists are involved in anti-social elements, over transaction or any rampant corruption we do not give them the tickets. Some MPs who have a criminal background what happens is that when they are doing a peaceful protest, sometimes unnecessarily the state government frames false cases on them because they want to defame that particular legislature or MP.”

Drawing a parallel line between the highest number of BJP MPs sitting in the state and the crimes committed, these 17 members have been booked under serious charges like attempts to murder, communal disharmony, kidnapping and crimes against women

Congress Party Spokesperson Surya Mukundharaj stated that, “Supreme Court had recently heard a petition relating to MPs and MLA’s cases where they are facing corruption charges, rape and murder and charges against other heinous offences. And there are more than 1585 MPs and MLA’s who are facing their pending trails. So, SC has constituted a special trail court which is in Karnataka as well and a special judge to look after these cases.”

He added that this is a serious matter where people are not aware and they are electing the representatives with criminal background. He said, “This is a serious threat to democracy. Congress is very strict in selecting their candidates. There are minor charges against the Congress sitting MPs. Sections 154 like movement struggle and issue based political charges are there. There are no heinous charges on our MPs.”

The Roads of the Future 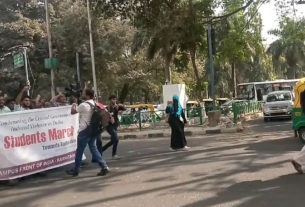