An independent candidate who sold tea in the street had contested nine elections with his profits.

Syed Asif Bhukhari is an independent candidate who has contested in nine elections. He runs a small tea shop which is a few weeks old in Commercial Street, Bengaluru. Before that, he sold tea in the streets with his two-wheeler.

He said, “I earn little money for my family and little money for the elections. I lost my old tea shop before the lockdown to someone’s greed. When my friends saw me selling tea in the road, they teased me.

“My dad and mom gave me full support. Unfortunately I lost my mother in February 2021. A few months from there, I lost my mentally-challenged sister. I was in deep depression until a few months now.

“I am 49 years old and presently I am not doing well. I have three sons and one daughter to look after. I’m running this new shop where I can make bread and butter for my family. It is really so difficult for me now. But I will not stop contesting elections.”

The Lok Sabha has three elected Members of Parliament who contested independently out of the 1900 independent candidates. None of the 187 independents, who contested the 26 Assembly constituencies in Bengaluru, could put up a good fight.

In the four assembly elections held between 2004 and 2018, the number of independent candidates has seen a threefold increase from 442 to 1,129 across Karnataka. The surprising part, however, is few are winning — from 13 in 2004 to two in the 2018 assembly polls.

Prakash Chaudhary, political analyst said, “From my experience, the hypothesis of bringing equality between party and independents doesn’t prove practical on the ground.”

Despite the election restrictions on religious and communal campaigning, most reputed party candidates work alongside religion or community.

Prakash Kumar, senior political journalist explained the ground reality why parties don’t invest on minority candidates. He said, “I was talking with a party leader. I asked him, ‘Why don’t you nominate adequate Muslim Candidates?’ and he admitted, ‘It is the wise decision because why to nominate the candidate who will lose?’ The parties try to bring their representation in Rajya Sabha and other places but it is difficult to contest direct election due to the inherent differences in the society.”

Varsha, a 21-year-old independent candidate contested in the local body elections. She expected people to encourage her when she nominated to contest election as a young independent woman but felt discouraged by people’s comments.

While this is the situation with young women candidates, Swarna Rajagopalan explained about the married women who contest in elections. She is the founder of the Prajnya Trust which works on gender equality. “When I was a student, I met a prominent women politician and trade unionist.  She said to me that there were two things that prevent women from entering politics. Money power and muscle power. Women also have concerns about who will babysit my kids. Who will care for you because you need a companion? Who will show up to work for your elections?”

Election commission (EC) is waiting for the census results from the government so that they can bring reforms that suit the present demographics.

Honnamba, Secretary, Karnataka State Election Commission said, “At present, we have categorized candidates under SC, ST, OBC, women and general. We should look into another section of economically-backward candidates irrespective of caste.”

Most times, the trigger to quit elections comes from the external influencers like threat or lump sum offers from big parties.

Mariyan has been approached by at least one party in every election after EC approved him. He says, “I was never compromised. I may win or lose but I need only good name.”

Honnamba asks the candidates to come forward and file FIRs when they receive threats from other influences. Only then the authorities can take action otherwise, it goes invisible. “Independent candidates do not raise voice against the big parties who threaten them because they think they may lose their voice in the house if they get elected.”

Another problem is to source people for their campaigning. Bukhari has done all his campaigning as a one man’s show. He takes his two-wheeler and prints copies of his pamphlets to drive around his constituency meeting people door to door.

Verniers said, “As far as manpower is concerned, there is very little that an independent candidate can do against parties.”

Election symbols given by EC are delayed which shortens the campaigning time of the independent candidates. Mariyan said, “Parties would have started to campaign long ago. Independent candidates have to wait, wait and wait.  Then, we will get only five to ten days. Police also hold the permission for a long time. By the time, we get permission, our auto rickshaws will run only for 3 days.”

Varsha agreed that the independent candidates, from day one, they file their nominations to canvassing votes, they have very limited time to win the people’s confidence.

Chaudhary explained the advantages of parties with famous symbols. “The party symbol gives the prepared pitch where people vote for the unknown face merely considering the symbol. Only the rebel-independents or the popular one shall win here.”

However, Verniers feels that it becomes tricky for authorities to treat candidates equally when there are more candidates. He gave the example of Nalgonda, Andhra Pradesh, where 480 candidates ran in 1996. Incidentally, it is the year EC raised the deposit necessary from Rs. 500 to Rs. 20,000 and the number of contestants went down drastically that year, but kept increasing subsequently, he added.

Above all, the right to contest in elections by Indian citizens come into question when the candidates move out of elections due to external influences.

Niranjanaradhya, Human Rights Activist explained a fundamental right cannot be curbed. “Bringing new rules, EC may say that this is for a larger public interest but the new rules should not prevent people contesting elections because it is their right. Instead of getting into more restrictive models, EC should think that all kinds of people are not the same,” he added.

However, this right is misused by some “Ghost Candidates.”

Verniers said, “We hear stories of ghost candidates, being propped up by parties to undermine their adversaries. For example, there was a second Rahul Gandhi contesting in Wayanad in 2019.” But he declined the thought of ghost candidates being the reason for someone’s loss.

During lockdown, Bhukhari saved some money by selling tea on the road and used that money in by-elections 2020. Bhukari said, “I did not spend much. I go to people. I ask for vote and promise to stand for them. Independent candidate have to work hard and give best. I do not have money to win election by money power.”

Political Party is an institution driven by public funding, whereas an independent candidate injects his own money as an individual, Kumar explained. He said that parties with more resources get voters stuck to their marketing aesthetics

When the source of money is limited, independent candidates sought loans for elections. Every time they fail, the loan is accumulated which also stops them from further political actions.

When the limited revenue to spend for elections is a problem, the tax levied on that expenditure is another trouble. The Income Tax Act 1961, Section 13A, gives 100% exemption from income tax to political parties. It also clarifies that for the purposes of this section, ‘political party’ means a political party registered under the Representation of People Act which means the tax exemption is unavailable to independent candidates.

Mariyan feels that limited spending by independent candidates is good because when politicians spend so much money, they will work to earn the money back. “When expenditure goes on increasing, the work decreases from the politicians.”

The mentality of voters towards independent candidate unlike people’s perception about big parties is not uniform.

However, voters like Smrithi are not many. Most voters do not want to take side with independent candidates who rarely win.

Some other voters feel that their voices will not be heard in the parliament along with the voices of the won independent candidates. Balan, a voter for 50 years said, “I would prefer to vote for legacy parties in any election. Federal structure of the government strongly supports the party structure where independent candidates have less say in policy decisions. I always want to vote for parties who can establish good state and central relationship.”

Mariyan saw many people support him during campaigns, but the vote bank showed otherwise. After the election results, he came to a conclusion that voters support three kind of people.  “Number 1:  those who give money for vote.  Number 2:  those who the local area leaders point to.  Number 3:  those popular candidates in media.”

Kumar explained this voter’s mentality stating that an independent candidate is the representative of various small groups compared to political parties. In a democratic system which demands equal representation of people in decision making, concentration of people into political parties is more helpful than independent candidates.

The EC uploads the affidavits of candidates in its website where voters can know their candidates; however, people are indifferent to independent candidates.

Honnamba feels that the responsibility to choose the right candidate lies with the voters. EC ruled that a candidate should publish his criminal cases in newspapers. She said that it helps the voters know the candidates better even if they are not downloading the affidavits.

Bhukhari got the best Citizen Award in 2016, Glory of India award 2017 and Bharat Jyotipuraskar award in 2017. He says to people who ask him why he contests despite various failures that, “I did not join Army, Navy or Airforce. I stood for the country as an independent candidate to do best service with good government.”

To a similar question, Mariyan answers, “I have hope that somehow I will achieve. God is there. Even if we are not winning we will still work for people.”

However, the result of untiring contest is another failure for them.

There is bias in the law itself where it lays no category for the independent candidates.

One of the main aims of EC is to conduct free and fair election. Niranjanaradhya believes that EC should come up with a new mechanism where the vulnerable candidates are treated better.

In other sense, regulating political funding is the mother of all reforms needed to restore electoral integrity in India, Vernier said.

Kathyayini Chamraj is the Karnataka State Co-ordinator of Association for Democratic Reforms (ADR). She shared an economical solution to the problems of true independent candidate and ghost candidates. She said that all the candidates contesting a particular constituency should reveal their manifesto on a common floor organised by the EC. She also suggests for Television debates where candidates can answer the questions of the voters. She believes that door-to-door campaigning is the main reason behind all election crimes. “EC should ban door-to-door campaigning. Candidates found spending on any kind of campaigning should be banned.”

Like Bhukari, there are a lot of independent candidates who want a working reform that may help them to win elections. A reform in the election rules was sought by all the parties except the political parties in power.

Bhukari says, “If God give me will power, strength and little money, once again I will contest in the election.” He is looking forward for a victory in the upcoming Bruhat Bengaluru Mahanagara Palike (BBMP) elections. 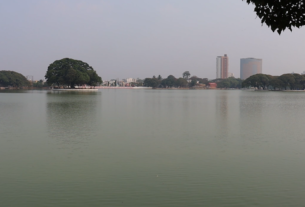 Waterways of Bangalore: In Search of Lost Paradise