In his seventh budget for Karnataka state, B S Yediyurappa, who also holds Finance portfolio in the state, focused on agriculture and allied activities, irrigation and development of the capital.

Bengaluru: The budget allocated for Karnataka state is around Rs. 2.37 lakh crore for 2020-21. Around three per cent of the total budget has been allocated for development of the Bangalore city.

The Chief Minister B.S. Yediyurappa said that the state was facing lack of funds due to reduction of state’s share in central funds and decline in overall revenue. Share of Karnataka state in Central funds is now at 3.6 per cent after 15th Finance Commission report and it has caused a fund-cut of Rs. 11,215 crore to the state.

Due to the lack of funds, the government has to increase excise duty on petrol, diesel and liquor. While excise on petrol and diesel is increased by three per cent, tax on Indian Made Liquor (IML) is increased by six per cent.

Petrol and diesel prices are expected to increase by Rs. 1.60 and Rs. 1.59 respectively after this hike.

Karnataka state congress criticized the move and said that BJP has rubbed salt into injury by further increasing prices & providing no relief to common man.

The budget speech presented by CM was one hour 46 minutes long and was record 102 pages.

Budget in rescue for farmers

In 2019, farmers in the state were affected by both floods and drought and most have not received relief as funds coming in from centre have been low. The government said that it is committed to provide relief to farmers affected by drought.

In the budget, Rs. 2,600 crore has been kept aside for Kisan Samman Yojana and Rs. 900 crore for Fasal Bima Yojana. For organic farming, Rs. 200 crore has been allotted in the budget. Further, horticulture will be considered as a separate industry in the state.

The budget allocated Rs. 500 crore for Kalasa-Banduri project paving way for the construction of the much-awaited dam. Government of India recently, in a gazette notification, issued order to implement August 2018 order of Mahadayi Water Dispute Tribunal.

Just like Bangalore-one, Grama-one will be introduced in all villages for smooth functioning of villages. Information about support price for agriculture produce and other works will be undertaken through this.

For Bengaluru city development, Rs. 8344 crore (three percent of the budget) has been allotted in the budget. “Bengaluru constitutes to nearly half of the total Gross State Domestic Production (GSDP) of Karnataka. People from across the state migrate to the city and due to this there is transportation problem. Hence, much importance is also given for development of Bengaluru city,” said BSY in the budget speech.

For suburban railway, Rs. 500 crore has been allotted for the year 2020-21. Central government provided Rs. 18,000 crore for the project in its budget.

To reduce traffic congestion and promote road safety, Rs. 200 crore has been allocated under Road Safety Fund.  It is also proposed to build 24 skywalks connecting metros in the city, provide infrastructure for underground parking in some areas and add 2450 new buses in Bangalore Metropolitan Transport Corporation’s fleet.

Rs. 14,500 crores has been allotted to improve connectivity to airport from silk board junction. A road from silk board via KR Puram of the length 56 km is proposed to be constructed.

Rs. 1000 crore has been granted for development work in 110 villages around Bengaluru city in two years. 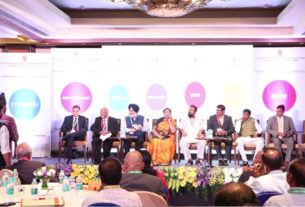