Pourakarmikas are not provided with safety precautionary equipment by BBMP to work during Covid-19.

Shilpa, a pourakarmika worker in Bengaluru lost her life to Covid-19 in July 2020. Prasad, Shilpa’s husband said, “It was difficult for us to find a bed when she tested positive for Covid-19. Due to her delayed treatment, she lost her life.” Prasad added that BBMP didn’t provide them with any kind of financial assistance for Shilpa’s treatment. Shilpa’s death due to delayed treatment and her family’s helplessness, reveals Bruhat Bengaluru Mahanagar Palike’s (BBMP)’s inefficacy to help to save the life of their worker.

Pourakarmikas in Bengaluru refused to meet the same fate as Shilpa and hence staged a protest in April 2020, all over the city demanding better and safe working conditions for them. While Shilpa might have lost her battle to life, but her death laid the foundation of a significant battle between pourakarmikas and BBMP. Protests broke out in many parts of the city in July as around 50  Pourakarmikas tested positive for novel coronavirus. Pourakarmikas demanded changing rooms, toilets, drinking water, sanitization of working equipment. They also demanded to be tested for Covid-19 immediately.

But the reality is not as same as it is on papers. Shilpa’s husband, Prasad is still running back and forth to BBMP to claim the whole amount. Prasad said, “ I have submitted all the documents that were required to get the full compensation money but I have received only Rs.10 lakhs out of Rs.30 lakhs yet.”

Munirajo, member of Karnataka Rajya Nagarpalike Nagarsabhe Purasabhe Pourakarmika Mahasanga said, “We have written numerous letters to the BBMP asking them to pay the whole compensation money to the families of Pourakarmikas who have lost their lives to Covid-19 but we are yet to receive any reply from them.”

Viswanath, BBMP engineer said that nobody has been provided the complete compensation money. He added, “We have submitted all the documents but the central government has not yet paid the money under the Pradhan Mantri Garib Kalyan Yojna .”

A study by the Environment support group revealed that during the lockdown, proper safety precautions were not provided to the pourakarmikas on their work by BBMP.  They were only provided with two to three sets of masks and gloves and only one bottle of sanitizer. They were also not provided with proper boots to wear to work. The pourakarmikas had to wash and re-use their masks. There was not any arrangement made for proper drinking water, proper toilets for them. Female pourakarmikas also did not have access to changing rooms while on their work during the pandemic. The survey found out that the safety protocol for collecting biomedical waste was only followed for hospitals, while it should have been followed for all the homes, especially those in containment zones. While quarterly medical checkup was mandatory for all urban local bodies to conduct for pourakarmikas, some urban local bodies were not conducting the medical check-ups at regular duration.

The study also revealed that while The Ministry of Social Justice and Empowerment advisory had made it mandatory for urban local bodies to brief the Pourakarmikas about the need for safety precautions and the danger of Covid but the Pourakarmikas in the city were not provided any awareness about the Covid-19 neither they were made aware about the vaccination drive by the BBMP.

Kopi Maa who works as a Pourakarmika worker with BBMP has to buy masks and sanitizer from her own expenses as BBMP is no more providing them masks, gloves, or sanitizers to clean the city. This not the story of only one Pourakarmika, but all Pourakarmikas have been working without any safety equipment for a year now. Kalyan, a Pourakarmika who works at BBMP Head Office said, “Since a year the authority has stopped providing me with masks, sanitizers, boots to use during work”. Kalyan also mentioned that the BBMP does not provide Pourakarmikas with any financial assistance, in case they contract Covid-19.

Munirajo said that though after protests the BBMP assured to provide safety precautionary equipment to the Pourakarmikas regularly, still some irregularities can be seen.

Two Pourakarmikas of the same ward have different stories to tell. While Prabha, a Pourakarmika who is under direct employment of BBMP at ward -119 said that the authority pays for her sanitizers and mask at the same time Challamaa , a Pourakarmika from the same ward who is also under direct payment of BBMP said that the authorities have stopped providing her with any kind of safety precautionary equipment at work since July neither she receives any kind of payment now from the authority to buy masks and sanitizers. She further added, “The authority did not even pay for my transportation when I used to come for work during the lockdown.”

Viswanath said that BBMP has been providing transportation services to all pourakarmikas and Rs.100 for food daily.

Dr.Sandhya of BBMP Dasappa Hospital who is in charge of treating Pourakarmikas, in case they contract Covid-19 said, “Pourakarmikas used to wear PPE-kits while they were working in containment zones but still around 50 Pourakarmikasin the Bengaluru city have contacted Covid-19 and eight Pourakarmikas have lost their lives to the disease.” She also added that BBMP bore all the medical treatment and medicine expenses of the Pourakarmikas who contracted Covid-19.

On 11th February 2021, BBMP started the vaccination drive for all the Pourakarmika workers in the city. BBMP announced that the Pourakarmika workers who will take the dose at their nearest primary health care system will get a half-day leave after their 10:30.a.m slot and those who do not take it will continue with their full day work. Out of the targeted 18,000 Pourakarmikas only 2,500 took the vaccination dose in the first two days.

Sarsimaa who is a Pourakarmika at Seeshadripuram that comes under Gandhinagar ward said that she has not been vaccinated yet as the vaccination drive has not started at their ward yet.

A BBMP health official informed that most of the Pourakarmikas are not keen to take the vaccine as they lack proper knowledge about the disease and vaccine. They feel that the vaccine will reduce the working capability of their bodies.

East Zonal Health Officer Dr.Manoranjan Hegde said that around 50%  of Pourakarmikas have been vaccinated in his zone.

Dr.Sandhya said that it will take more than three to four months for the vaccination drive of Pourakarmikas to get completed in the city.

Munirajo said that around 1,000 Pourakarmikas in Bengaluru city have been vaccinated.

Viswanath said, “Pourkarmikasn were provided awareness about the vaccination by the BBMP. There was hesitancy among the Pourakarmikas initially but BBMP officials almost convinced everyone. Around 90-95% of pourakarmikas have been vaccinated.”

Professor of Mass Communication Akkamahadevi University, Onkar Kakade, said, “The BBMP can improve the awareness about vaccination among Pourakarmikas by door-to-door campaigns and the association can be very helpful tool in this. Through the association, they can remove the hesitancy found among the pourakarmikas.”

Covid-19, not the only battle Pourakarmikas are fighting

According to a research, Pourakarmikas stay on road and work in scorching heat in unhygienic conditions. They are an important part of society as they serve people and society by cleaning the garbage and streets of the city. They come at the bottom of the social ladder. They are considered to be untouchables due to their caste and are mostly illiterate. The Pourakarmikas need to be informed about their rightful rights, as most of them are not aware of it. That is why whenever BBMP formulate a policy for them, they are mostly unaware, hence the policies are not properly implemented. As they are addicted to cheap liquor and tobacco, they are prone to more diseases.

Viswanath said that Around 5 percent pourakarmikas have not been vaccinated in the city yet due to their alcohol problem.

Recently, Pourakarmikas staged a protest demanding equal pay, an increase of basic pay to Rs.30,000, and housing facilities. Out of 18,500 Pourakarmikas, BBMP recruits only 4000 under direct employment. According to AICCTU Karnataka, the wages of the Pourakarmikas were last revised in 2016. 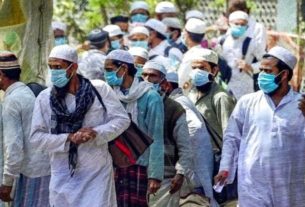 Prejudice is An Even More Dangerous Virus 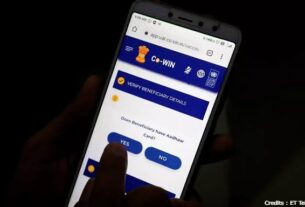 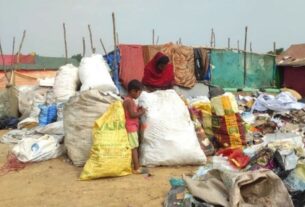 Persecuted at home, Rohingya refugees in Bengaluru are still grasping at straws