Lack of awareness about the banking facilities in rural areas makes cashless economy an unarchived dream.

The rural population covers about 66% of India’s total population, according to the World Bank. Karnataka covers around 4.5% of the rural population in India, according to the 2011 data provided by Reserve Bank of India (RBI). The people in the rural areas do not know about the financial schemes as they do not have easy access to the banks or ATMs . They also lack knowledge about the digital payment apps and online banking facilities. India is one of the lowest in the human to ATM ratio among the BRICS (Brazil, Russia, India, China and South Africa) nations. The lack of banks and ATMs are causing a major problems for the people in the Sandur Taluk in the Belary District of North Karnataka.

Sandur Taluk is famous for its Iron ore mining and the Kumaraswamy temple and has a population of around 2.5 lakh people with around 87 villages. According to the data provided by the Karnataka Gramin Bank, Sandur Branch, they have opened only 11,275 total number of accounts under the Pradhan Mantri Jan Dhan Yojna (PMJDY) scheme since 2014, when the scheme was launched.

Kumaraswamy, a textile businessman in Taranagar village said, “I don’t have cash to pay to my employees sometimes. When I need urgent cash, the ATM is either closed or it charges twenty-six rupees from the bank account even if we want the bank statement. When I have to transfer money urgently post banking hours, I have no other option but to keep my manufacturers wait. This bank which is there in the village does not have its own ATM here.” He also added that sometimes the long wait for money transfer causes losses due to delay in production.

Rangarajan, an IT engineer from Taranagar explained the reason for the people for not using the UPI payment apps. He said, “People don’t know about GooglePay and PhonePe and they don’t know how to use them either. They think that money will be transacted from their account without their knowledge and they will lose money. We need more awareness about PMJDY also in the village.” Some of them don’t even have bank accounts, he added.

According to the data provided by the Karnataka Gramin Bank, Taranagar branch, 1,391 accounts amounting to 53 lakhs have been opened under the PMJDY scheme since 2014. Balu Mahendra Nayak, bank manager of Karnataka Gramin Bank, Taranagar said, “We are making efforts to make the people aware about the government schemes and other schemes related to banking by the Government.”

Sandur is also famous for its traditional lambani embroidery by the Sandur Kushala Kala Kendra which is recognized by the United Nations Educational, Scientific and Cultural Organization (UNSECO). They manufacture and sell hand loom and handicraft products. The artisans earn Rs. 100 per day and work from 10:30 am to 5:00 pm. Their embroideries have received National Awards for handicrafts. Praveen, the marketing head of the organization said, “The business is running at losses due to the dip in sale of hand loom and handicraft products and the artisans are forced to quit jobs and work in other sectors for a living.”

Paru Bai, a lambani woman who owns a general store said, “They don’t pay much. Rs. 100 per day cannot feed a family of three. I had to quit my job because I am the only one earning in the family. They give basic groceries which can feed just one person and that’s not enough. Now that I own this general store, I am able to feed my children.” Anand S, President of the Salem Textile Manufacturers and Exporters Association said, “The traditional embroidery makes profit only if it is sold by a big brand. Its because of the consumer behavior, people like costly things.” 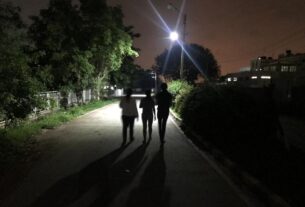 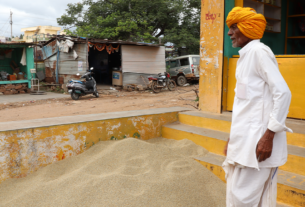